When it comes to cutting CO2 emissions, reducing energy demand is where our energies have been focused. Car manufacturers have improved engine efficiency for better mpg, appliance manufacturers have increased the electrical efficiency of their products… and in the built environment, we’ve reduced gas and electricity usage for heating, cooling, hot water, and lighting.

As a project partner on the UK Green Building Council’s Advancing Net Zero initiative, at Hoare Lea we’ve been looking at how diversification could be as effective as demand reduction when it comes to achieving a zero-carbon future.

Is all energy created equal?

Reducing energy demand works if all units of energy are created equal: one kilowatt hour of gas from the grid has the same amount of CO2 associated with its combustion no matter when it is consumed. If you reduce a building’s annual demand for gas, you reduce its CO2 emissions by a proportional amount – simple.

However, as we move to an electrified nation – one with electric heating and cooling systems as well as vehicles – the accepted approach of reducing demand to reduce carbon dioxide emissions may no longer always ring true.

What the numbers say.

The carbon factor of electricity is a metric for describing the amount of carbon dioxide released for every unit of power used at the plug. Currently, an annual average emissions factor is used for carbon reporting. The problem is, this doesn’t account for regional or seasonal fluctuations in the carbon intensity of electricity, let alone the variation over the course of a single day.

Using half-hourly reported carbon factors for grid-supplied electricity, we were able to investigate the variation in carbon factor on a monthly, daily, and hourly basis in 2018. From this, we calculated the average carbon factor for each hour of the day: 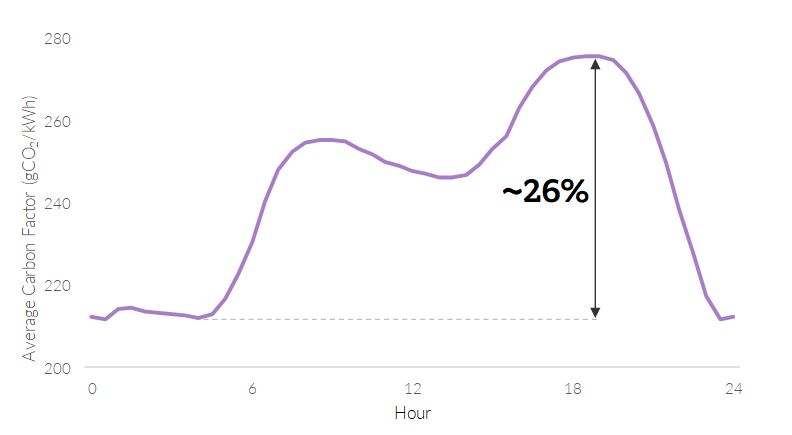 It’s all in the timing.

What does this mean for real world efforts to decarbonise the built environment? Well, imagine we have two identical all-electric buildings with equivalent total energy demand. One building utilises storage and smart systems to offset the entirety of its peak time demand to night time off-peak periods, while the other demonstrates the majority of its energy use during peak times.

The latter of these two ‘identical’ buildings could be responsible for as much as 50 percent more CO2 emissions over the course of the year, despite both consuming exactly the same amount of energy annually.

Put another way, it would have to reduce its annual energy consumption by a third to have the same impact on net CO2 emissions compared to diversifying its demand to off-peak periods.

Why is this significant? Ultimately, it means diversifying electricity demand away from peak times can (and often will be) just as important as reducing demand altogether.

The missing component in carbon reporting.

The impact that diversifying electricity demand could have in real-world operation is substantial. However, it is (as yet) unaccounted for in carbon reporting.

If companies and building occupiers are to paint an accurate picture of the true footprint of their assets, we must start calculating operational carbon emissions using a variable carbon factor, specific to region and time of day.

Smart meters’ ability to record both the time and amount of electricity use will enable this with relative ease.

We can diversify demand in a number of ways – the most obvious, as we’ve already touched on, is via energy storage. Both thermal and electrical energy can be stored during off-peak periods and then discharged back to the building at peak times, reducing peak time demand.

Another solution is to move non-essential/non-urgent services to off-peak periods, which I discussed in part three of this series. Smart appliances (such as dishwashers and washing machines), as well as EV charging, will soon be able to operate when electricity is lowest carbon and, through exploiting so-called time-of-use tariffs, when it is cheapest too. It’s no surprise that we’re seeing utility companies offering electricity at prices as low as 5p/kWh at night to incentivise this shift – meeting peak demand is when electricity is most costly to generate. Indeed, the National Grid’s future projections require this shift to occur to ensure we balance demand and generation, continue to meet our legally-binding obligation to decarbonise, and mitigate the most devastating consequences of man-made climate change.

Ultimately, reducing demand should rightly remain a focus. However, in this journey to electrification, we must shed the entrenched belief that it’s just ‘how much’ electricity we consume that matters, not when we use it.