What does this mean for you?

OFGEM have announced the new price cap for default energy tariffs which takes effect from April 2022. The price cap on energy sets the maximum amount suppliers can charge customers on a default tariff. The underlying typical tariff for electricity will increase from 21p/kWh to 28p/kWh and for gas from 4p/kWh to 7p/kWh.

What is causing the increase in energy prices?

Gas, coal and electricity prices have risen to their highest level in decades. Gas is in high demand globally whilst a squeeze on supplies has pushed the wholesale price to this unprecedented level. A cold winter throughout Europe put further pressure on the gas supply. Stored gas was used to help meet the demand, especially in Asia, which put pressure on liquefied natural gas supplies.

Poor weather conditions meant that renewable generation fell to the lowest level in four years. Wind speeds dropped to their lowest level this century resulting in wind generation decreasing by 30% compared to the previous year.

The high global price of gas has also affected electricity costs. Over 1/3 of the UK’s electrical energy is generated from gas fired power stations.

What does this mean for consumers?

The UK’s housing stock is leaky and old. 85% of the homes rely on gas for space heating and subsequently will be considerably affected by this announcement. It’s estimated that 3 million homes are already experiencing fuel stress, with that figure expected to rise to over 6 million when the price cap is introduced in April, approximately 27% of the UK housing stock. Fuel stress is experienced when over 10% of income is spent on energy bills.

Ofgem have attributed around 10% of the rise to covering the 28 energy suppliers that collapsed as a result of the energy crisis in 2021. A further breakdown of the new price cap is shown below. 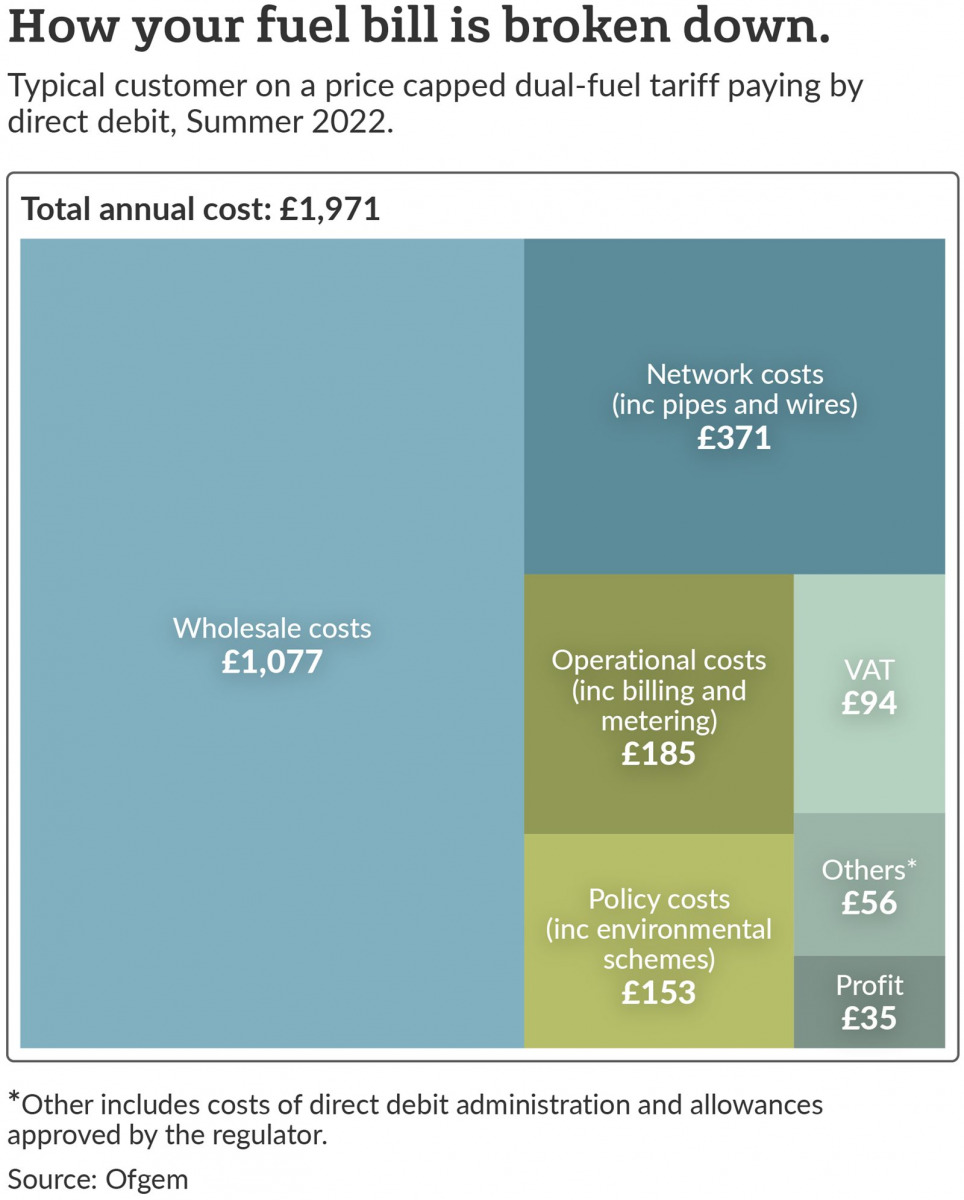 What can be done?

The chancellor announced a £200 rebate for homes in England, Wales and Scotland, with a similar amount available to homes in Northern Ireland from October. The financial support has been welcomed but ultimately deemed insufficient. This rebate applies for all homes in council tax band A to D, approximately 80% of all homes.

Ofgem will introduce quarterly reviews of the energy price cap, instead of the current biannual review. This will provide an opportunity for the price cap to react to any drop in energy prices to better reflect the real price of energy for consumers.

Levels of fuel stress are anticipated to be highest amongst local authority households and pensioner households. Whilst this announcement will have the largest impact on the most vulnerable demographics of society, global energy providers have benefitted and posted enormous profits. This profit will leave a bad taste in the mouths of consumers and renew calls for a Windfall Tax. France have forced EDF, the state energy provider, to lose 8.4 billion euros in profit to protect households, but no such model has been discussed in the UK.

The importance of minimising our reliance on fossil fuels to heat and power our homes has been brought to the forefront of the national discourse.

Insulating our buildings to reduce energy demand will also alleviate the pressure on the grid and better protect the most vulnerable consumers in society from high energy prices. Switching to low carbon technologies, the continued decarbonisation of the grid and managing when consumers use energy will be of the utmost importance to reduce exposure to the volatile global energy market.

The UK government must now act. The UKGBC have called on the government to immediately spend the remaining £1.6bn, dedicated to insulating low income homes. Further grants will be required to install the 600,000 heat pumps per year by 2028, as outlined in the Heat in Buildings Strategy published last October. In addition, development of smart technology and a rise in consumer awareness of demand response will ease our transition to electrification of heat and a decarbonised grid.

We are now closer to the 2050 deadline for net zero than 1990, the year used as a baseline for emissions. We can reduce energy consumption, alleviate fuel poverty, and convert to low carbon technologies but action is required now.