The highs and lows of hydrogen.

With the commitment to decarbonise the UK to Net Zero by 2050, it’s plain to see that natural gas as a heating fuel has an expiry date; it could be argued that date may already have passed.

In part 1 of this series, we identified that up to 30% of the UK’s gas supply could be replaced with hydrogen mixed directly into the natural gas in the grid without necessitating a change to buildings’ heat-raising plant. 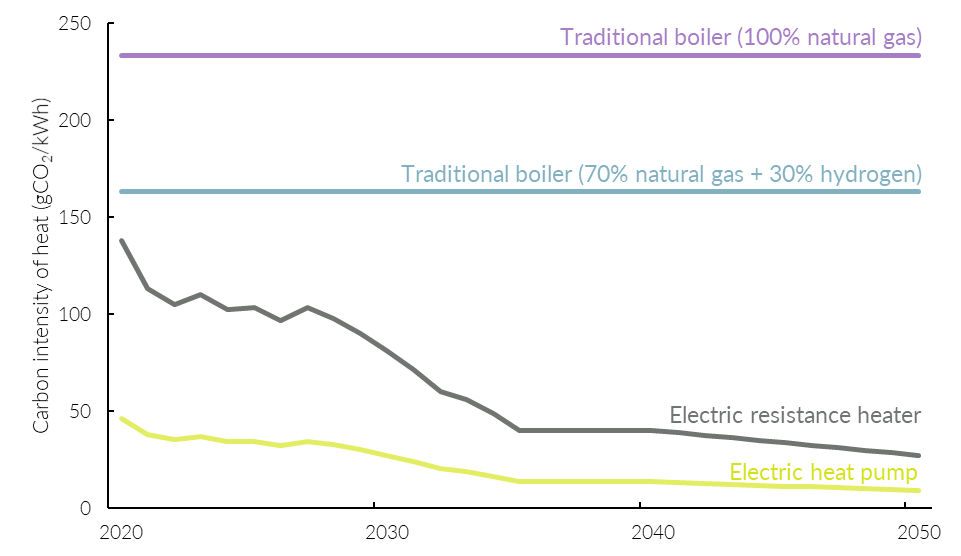 To provide net zero heat using hydrogen, we need a wholesale overhaul of the gas supply networks and to establish a stable hydrogen generation economy. But how feasible is that?

1. Steam methane reformation (SMR)
Reforming methane with water under high pressure to produce hydrogen and carbon dioxide is not a new process and has been used industrially for many decades. However, it is only around 70% efficient and until the CO2 from this process is captured and stored such that it is never released into the atmosphere, using the hydrogen produced from SMR to heat buildings would be much more energy and carbon intensive than just burning the natural gas directly, as with the current gas grid.

Industrial-scale Carbon Capture and Storage, or CCS, could solve this. The most promising method for doing this is to pump liquid carbon dioxide into existing natural gas deposits, to aid the extraction of the remaining gas and to trap the CO2 indefinitely.

However, whilst CCS is a central part of Britain’s planned trajectory to decarbonise to net zero by 2050, the technology is yet to see any successful deployments in the UK.

Ultimately, producing low carbon hydrogen at scale by reforming fossil fuels is not going to be an option for the foreseeable future.

2. Electrolysis of water
As such, current focus is on using the process of electrolysis to produce hydrogen. By passing an electric current through water, it can be decomposed into its constituent hydrogen and oxygen and if the electricity used to perform this process is from renewable sources, the resulting hydrogen is truly zero carbon.

Electrolysis is up to 80% efficient. Compare that to an electric resistance heater at around 100% efficient and a heat pump at around 300% efficient, and the argument for hydrogen begins to wane. The graph below shows how more than four times more heat could be generated from a heat pump compared to a hydrogen boiler for the same amount of electricity consumed. 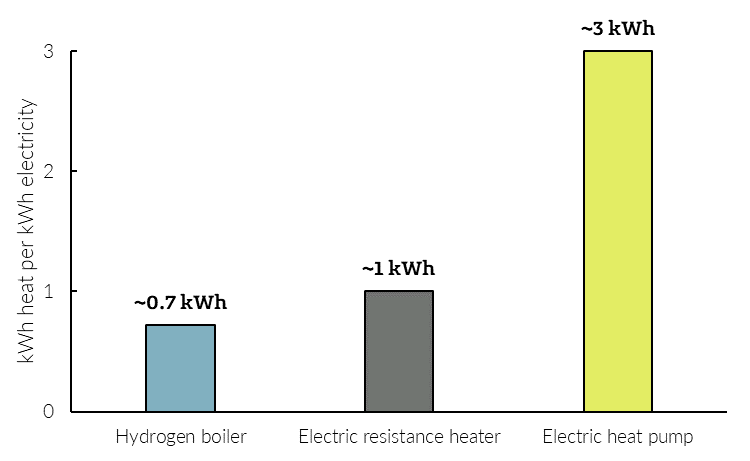 The UK’s electricity grid is already strained, as the shift to less dispatchable (on demand) forms of generation, such as wind and solar, leaves us less able to meet our peak electricity demand. A transition to electric vehicles is likely to exacerbate this and with the need to rapidly decarbonise the way we heat our buildings, aligning behind a technology which would require four times more electricity than moving to electric heat pumps seems challenging to justify.

However, many of the UK’s existing homes and buildings are geared for gas and swapping out a natural gas boiler for one that runs purely on hydrogen would demonstrate significantly less disruption than the installation of a heat pump.

For this to become a possibility, the UK’s gas networks need to transition to 100% hydrogen distribution, which is more complex than just changing the fuel supplied to the pipes.

An entirely new transmission network would have to be constructed if a national hydrogen supply network is to be established, and upgrades to boilers and meters will be necessary to enable the buildings to make use of the new fuel.

Ultimately, there are strong arguments around efficiency and carbon to suggest that transitioning to hydrogen heating may never be the correct route to decarbonising the UK’s building stock.

However, that does not mean that hydrogen does not have a part to play in the UK’s journey of decarbonisation. In the next insight in this series we’ll look at how hydrogen may end up playing an integral part in balancing the UK’s ever greener, but consequently less dispatchable, electricity grid…