Our cities provide insight into the future of urban living. This Living Challenges series looks at how the problems society is facing are being turned into possibilities…

The world’s cities occupy just three percent of the earth’s land, yet account for 75 percent of carbon emissions and 60-80 percent of energy consumption. Based on current projections from the UN, 2.5 trillion square feet of new buildings will be constructed worldwide by 2060 – the equivalent of adding another Paris to the planet every single week.

If we continue with a ‘business as usual’ mentality, sea levels are predicted to rise by approximately one metre, along with a predicted average temperature increase of 4°C by the end of the century.

While global initiatives (such as the Paris Agreement and the move to a circular economy) should help mitigate these figures to less extremes, the associated impacts of the inevitable change in climate have to be planned for.

Climate change is the ultimate incentive for innovative urban design – and when it’s viewed not just as a problem but as driving force for creativity, it can provide a fast-track route to better ways of living. Across the globe, there are investigations into how urban living needs to adapt in the face of an uncertain future.

A new Global Centre of Excellence on Climate Adaptation based in Rotterdam is looking at how cities can be reimagined. As a collaborative project between the Netherlands, the UN, and Japan, it’s leading a shift in thinking: instead of working against a changing climate, why not re-engineer cities to work with it? 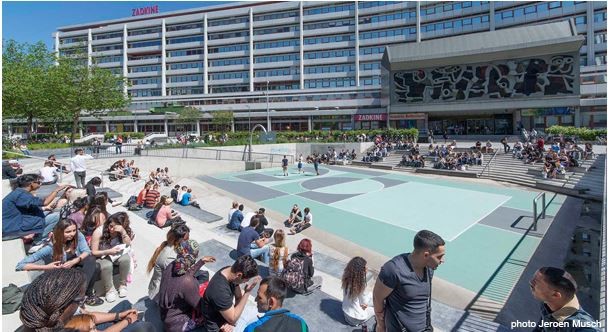 Rotterdam, for example, now has five water plazas dotted throughout the city. These plazas act as community hubs in dry weather and, in heavy rain, hold up to 1.7 million litres of excess water. This adaptive approach was made possible by combining budgets for storm water infrastructures and liveable public spaces.

Probably the most reaffirming view of future urban living is that sustainable buildings are becoming ‘sexy’ – stunning even.

The practicalities of net-zero homes that can adapt to a changing climate won’t mean compromises on style and quality of space.

In fact, the trend towards biophilic design and Blue-Green infrastructure (BGI) offers a people-centric, feasible and valuable solution for urban areas facing the challenges of flooding, overheating, and other extreme weather.

Taking this further, our homes might even be designed to meet collective climate rights of future generations. There are intrinsic links between climate change and human rights, and there is an increasing argument for human rights to play a leading role in guiding global responses to climate change. This is likely to result in policy created around the rights of future generations: for anything from a hospitable indoor/outdoor environment, to a plant that provides a full quality of life.